Chicken tortilla soup is a traditional Mexican dish that can be as simple or as complicated as you like, with a loads of delicious garnishes and touches. 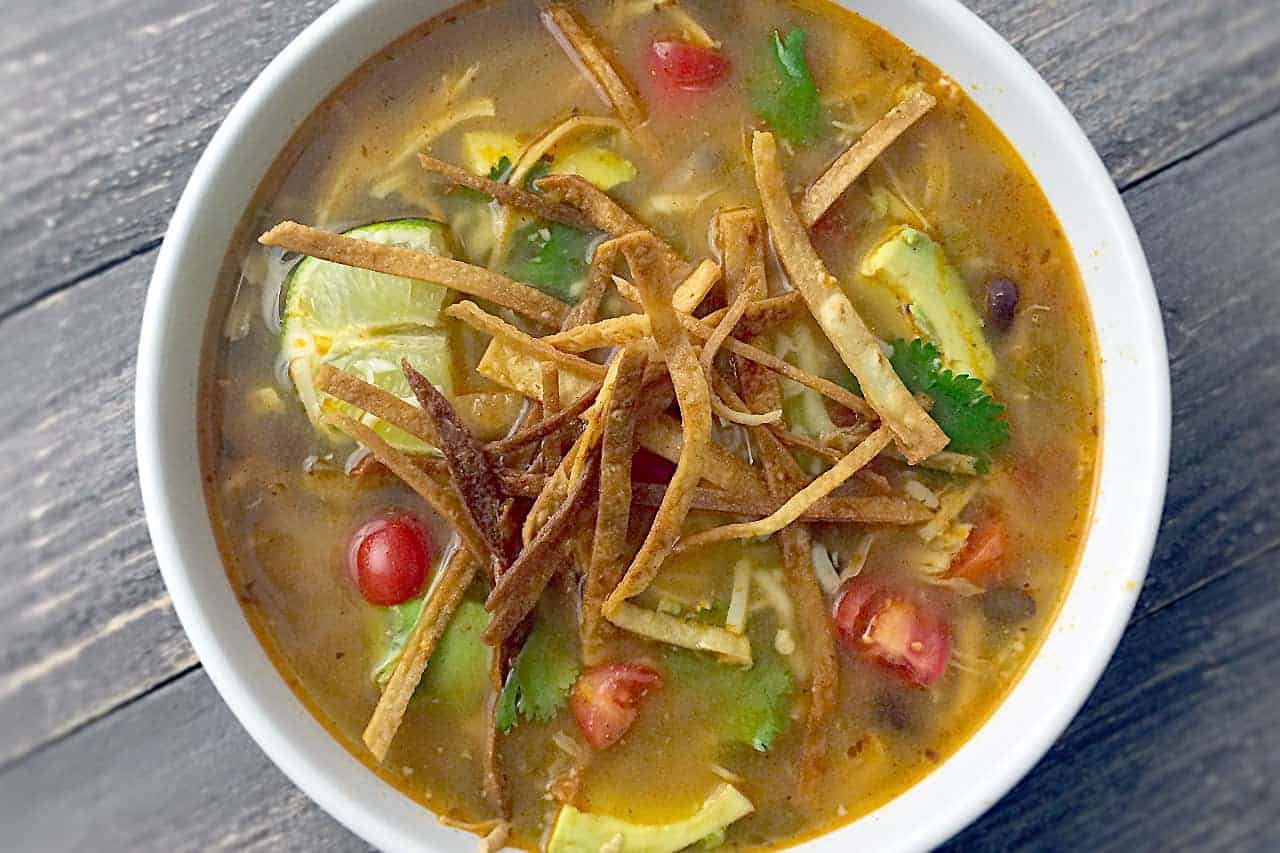 Prepare the dried chiles
Cut off the stems of the pods and use a knife to scrape out the seeds. Tear or cut the chile pods in half. Heat a large heavy-bottomed pan over medium to high heat and dry roast the peppers for 30 seconds on each side. Place the peppers into a heat-safe bowl and cover with a 1/2 cup of boiling water (you may need to weigh the peppers down). Let sit for at least 30 minutes or until the peppers become very pliable. Let cool.

Broil the tomatoes
Set the oven to broil and cut the tomatoes in half. Place them cut-side up on a foil-lined pan and broil for 15 minutes or until the tomatoes are partially charred on top and completely softened. Let cool.

Combine the chiles, tomatoes and stock
Stir together the chiles, and tomatoes with the stock. Working in batches as necessary, carefully blend the stock mixture on high until it is completely smooth. Important: Blending hot liquid can be dangerous.

Sauté the onions, poblanos and corn
In a large stockpot over medium heat, cook the remaining onions (roughly chopped), poblano and corn kernels in vegetable oil for 5 minutes or until the onions become tender.

Add the garlic, spices and beans
Mix in the remaining garlic (grated or finely chopped), cumin, Mexican oregano and black beans and cook for an additional 2 minutes. Be sure to completely grind the Mexican oregano as the stems are hard and can be very distracting while you're eating if you're not careful.

Add the stock and corn flour
Pass the stock back into the stockpot through a fine mesh strainer. Ladle out about 1/4 cup of soup into a measuring cup and whisk the corn flour and stock together to form a slurry. Whisk the slurry back into soup. The corn flour is an efficient method to thicken and flavor the soup, which replaces the more traditional, namesake method of dissolving corn tortillas. Add 1/2 cup of cilantro and bring the soup to a simmer. Season with the salt and pepper.

Garnish the soup
Finish the soup by adding the shredded chicken back in and squeezing the juice of a lime wedge (or two) into each bowl of soup. Garnish with the remaining cilantro, avocado pieces, Mexican crema, pico de gallo, cheese and tortilla strips.

FOR THE FRIED TORTILLA STRIPS
9

Cut tortillas into strips
Evenly stack the corn tortillas and cut in half. Stack the two halves together and cut into thin 3-inch strips.

Fry the tortilla strips
Preheat a large, heavy-bottomed pan or cast iron skillet, preheat about 2 inches of oil over medium to high heat. The oil should be a constant temperature of 350 degrees F. Working in small batches, use a slotted spoon or wire skimmer to hold down the strips for about 3 minutes per batch or until they turn golden brown. Remove to plate lined with paper towels to drain any excess grease. Sprinkle with salt.