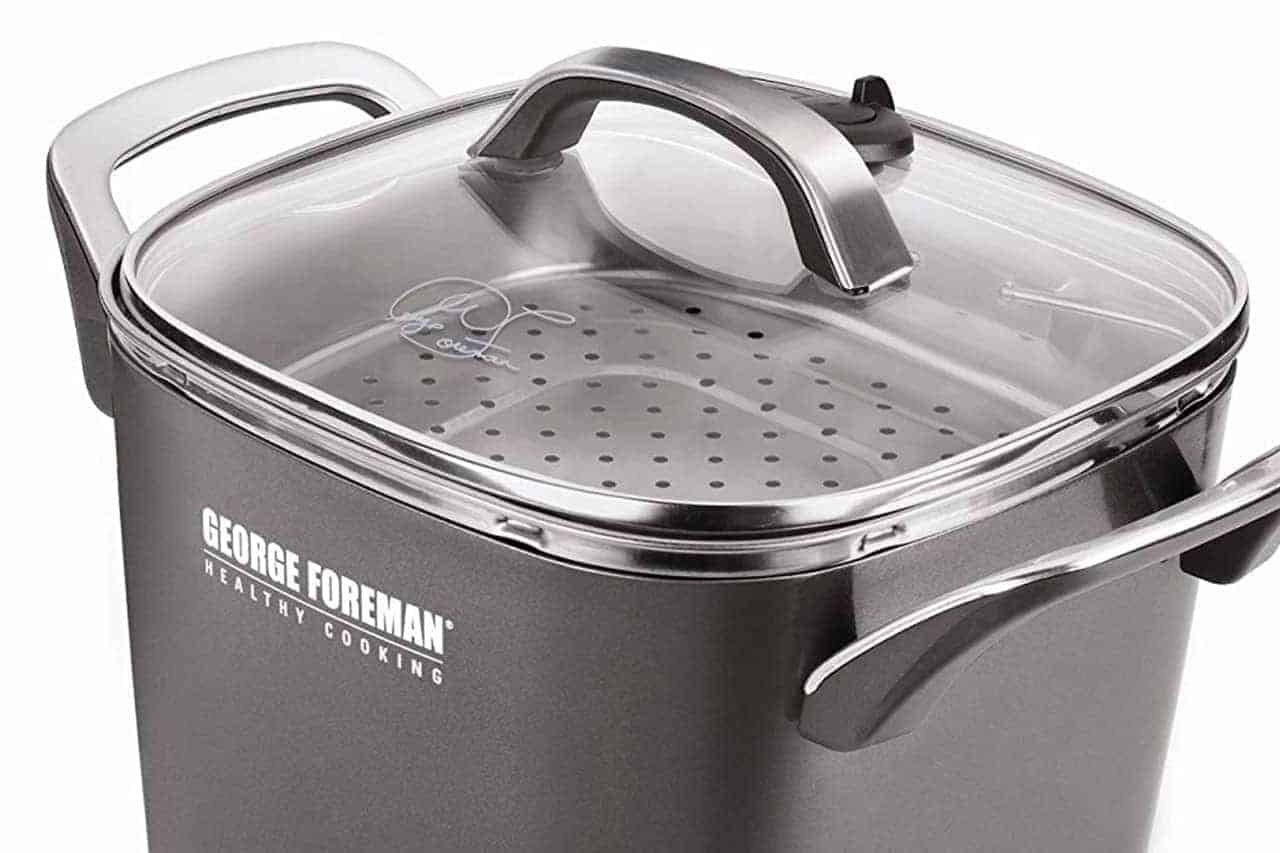 The George Foreman Multicooker has to be one of the best purchases I’ve ever made. While no appliance is without it’s issues, it’s hard to sing the praises of this relatively inexpensive culinary workhorse loudly enough (at least not in tune).

DISCLOSURE Hey there! Just so you know, this post might contain links to Amazon or other affiliates where we make a small commission on qualifying purchases at no extra cost to you. We’ll always let you know when we’ve been compensated or solicited for a review in any way.

As its name suggests, it’s far more than just a slow cooker. In addition to functioning as a slow cooker capable of searing meats without an additional pan to clean, it’s also a rice cooker and steamer. It has a ton cool features that make it really versatile.

I originally got this on Amazon for under $50 but its commonly available on Amazon now for as low as $30. Which is a really great deal for the price when you consider that I could have a most of the multi-cooker functionality of higher priced models but at a fraction of the cost. So I could have one weirdly steampunk KitchenAid Multi-Cooker with a stir tower or I could buy one Foreman Multicooker for everyone on my block.

As a rice cooker (more below) this multicooker makes a great slow cooker. It does a good enough job that most people won’t miss their rice cooker but perhaps not quite good enough for those of you who are very particular about your rice. It also steams, so you don’t need an extra pan to steam your veggies (or tamales!) and sears so you won’t need to get out a skillet for an extra step and saves you from some extra cleaning. Missing are the frying and fondue features of the more expensive models but you can afford to go out for fondue now with all that money you just saved.

Performance as a slow cooker

I have the 30-cup model so I can cook an entire brisket at a time. Its square shape takes some getting used to if you’re accustomed to the ovular shape of your everyday off-the-shelf slow cooker, and it’s possible that for longer cuts of meat, like brisket, you may have to break them down more than you would otherwise prefer.

I rarely use the sear feature (it’s just not a huge selling point for me) but other than it’s profile being a little smaller than a traditional slow cooker (which is a good thing in small kitchens), it functions exactly as advertised.

It’s also really handy to be able to steam a side of veggies while you’re making your main dish, too.

Performance as a steamer

Steaming is, of course, just steaming. It just requires that you bring liquid to temp (usually a boil) with a basket of some kind over it, not touching the liquid. Easy-peasy. It does the job as admirably as you might imagine. But my favorite part of it is the size of the steamer basket.

My old rice cooker had one, too, but it wasn’t nearly as big. This one can fit enough veggies in it to serve four to six (depending on the size of the portions). I really wish I’d had it when I was making Christmas tamales a couple of years ago. At the time, I used the steamer on my rice cooker and could only fit about four or five in at a time. Even though tamales only steam for a few minutes, it took forever. With this, I can do as many as 15 at a time.

My only issue is that since the steamer basket is stainless steal (and intended to be stored in the cooker when it’s not in use) it’s actually appears to be causing some damage to the top of the cooker’s nonstick surface. Not a huge thing since you don’t really cook with that part, but I still hate to see it damaged, especially since everyone knows you can’t use metal on nonstick surfaces, so one would think they’d have planned for that a bit better.

Performance as a rice cooker

The Foreman Multicooker has variable settings for white rice and heartier rices (like brown or wild rice) but I’ve personally had a little trouble with it as a rice cooker, but not enough to be disappointed. Generally, when I make it, the rice tends to be a bit on the sticky side and I have a little bit at the bottom that browns and kind of sticks. I know this crust may be an honored delicacy in some parts of the world but it’s a first for any rice cooker I’ve owned. But since it’s easy to clean, it hasn’t really been a problem.

And that’s where the part I most dislike comes in — the cup. Included with your Foreman Multicooker is a small plastic measuring cup that isn’t a true cup, so if you lose it, you can’t measure out the rice anymore. It’s nice that it has lines on the inside of the where you just fill the water up to depending on the number of cups, but unless you have lights in the right place in your kitchen, they can be very hard to see.

My advice is to measure how much rice that cup equals of whatever type of rices you tend to use, then do the same to find out how much water pours over the rice to hit the fill-line. Write it down somewhere and use that (it varies based on the grain size and type of rice).

That said, I’ve used it to make Mexican rice several times and other than the sticking issue sometimes it’s turned out great. One thing I’ve found that’s helpful is the stir it once or twice towards the end of the cooking process (even though the directions say not to open it).

Lack of an alert function

Other than my apparent inability to properly cook rice in it (which may just as likely be my fault as much as the device’s), my only complaint is the lack of a beep function to notify you when it’s done. The rice directions have you allowing it to stand for 20 minutes after it switches from cook to warm, but you have to really pay attention or you’ll miss it. Obviously, the way around this is to just time it really carefully the first time or two and set your own, but it seems like a silly thing to have to do.

When researching the Multicooker, I noted that a couple people had issues with the nonstick coating coming off during the first use and ruining their food. This is different than the issue I’m having, which is the normal deterioration of a nonstick surface due to everyday use.

That said, there were only two reports of this that I saw and one of those people noted that the company replaced their cooker, even with no receipt. I do believe this to be an isolated issue, though.

I’ll admit that the instruction guide it comes with leaves something to be desired. They just tried too hard to keep it brief, and the result can be confusing at times, so you have to read some things a couple times to understand. I’ve been told you can find a longer one (that does contain at least a few recipes) online, but I couldn’t find it.

Luckily, you don’t need recipes to come with it. It’s a slow cooker, people! Were you really just going to make whatever recipes it came with and nothing else? Of course not. I’ll admit having a sample recipe to try while you’re getting used to the way it works can be nice, though. Just use any slow cooker recipe you find on a reputable website. In fact, any slow cooker recipes on this site were probably made in this bad boy. Use one of those. Just remember that if you need the meat seared, you’ll have to do that first. Better yet, use one you’ve made before so if something comes out wrong, you can better decide what adjustments you have to make for this cooker.

Update: Found it. Here is the much improved manual (with recipes) for our George Foreman Smart Kitchen Multicooker model RC0010B and  for the RC0995P/RC0995PQ models as well. 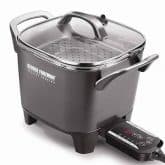